At first sight Roberta was born with only a small cleft palate, but after entering intensive care, she remained there for six months between Niguarda Hospital in Milan and Meyer Hospital in Florence. The first real diagnosis arrived after about five months, "acampomelic campomelic dysplasia", a such rare genetic disease that she is the first known and diagnosed case in Italy. A pathology that affects the entire skeletal system, with multiple malformations that jeaopardize also other apparata.

In the first four months of her life, she underwent three major surgical operations, she faced and defeated pneumonia, killer fungi, severe respiratory crises, difficult extubations, but above all the distrust of many people.

Roby has a tracheotomy, is fed by PEG (probe in the stomach), has an atlanto-occipital instability and a major degenerative scoliosis. However, she is an amazing and incredible child from all points of view. Her first and a half year of life was an ordeal, the first weeks a real hell, from which no one thought she could get out, but she has always fought with an incredible strength, paving the way for her parents and family.

If parenthood is complicated, being parents of a severely disabled child is almost impossible, but that almost includes a wide variety of emotions that, if positively transformed, can allow you to make it. And it is paradoxical, as well as outrageous for a civilized country, that often, if not always, problems are not due to the helplessness of medicine or science, but to the indifference of the Institutions, for which, even nowadays, disabled people represent a problem instead of an opportunity.

This is the reason why, after a first moment of fear and panic for the diagnosis, during which we locked ourselves away from the world, we decided to open a blog "How to think you're in heaven while you're in hell", through which not only launch a positive message, but also get out of the loneliness that grips all families like ours, and then found this association. Fighting practically on a daily basis with the Institutions, with politics and with the health care system, is not only unfair and anomalous, but in the long run it becomes psychologically devastating for a family that should only think about assisting their child in the best way, and would have the right to be put in the ideal conditions to do so by a State that, instead, makes us feel alone and abandoned.

"Nobody is out" was born to give voice, help and hope, and has the special aim to clear the term disability, bringing the issue to the attention of politics and civil society, and conveying a message of true and real inclusion, so that the lives of these children, despite all the difficulties related to their various diseases, can be lived in depth. 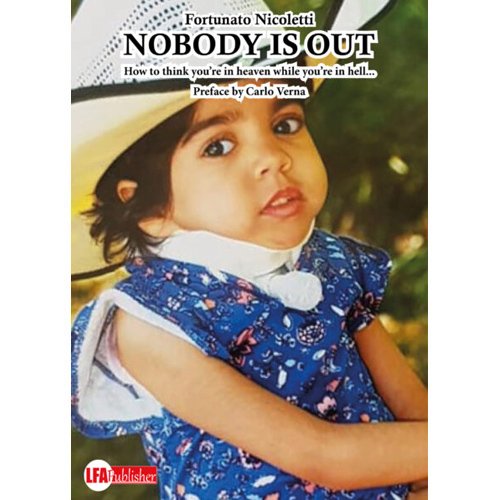 Book Nobody is Out

The book "Nobody is out" was born from an experience of severe disability and aims to be a tool to share the love for a child, the strength of a family, the importance of unity to pursue a goal, but above all it witnesses the existence of different stories. This work also attempts to dissect the countless and often insuperable difficulties that people with disability and their families have to face every day, with the aim to underline the huge failings of both national and local politics, and unfortunately of civil society.

Disability is not a chronic disease that makes one troublesome, but should be considered one of the many possible conditions of human existence, to come in terms with. Disability does not mean to be special or inferior, but simply being different. Different as Roberta, who seemed to be born only with a cleft palate, but after being admitted to intensive care, remained there for six months, with a diagnosis that was not only inauspicious, but also unprecedented, "acampomelic campomelic dysplasia".

After a first moment of dread and total closure in our drama, we could not help but "donate" this extraordinary experience to others. Fighting practically on a daily basis with institutions, politics and healthcare system, in the long run can become psychologically devastating, but can also generate a new awareness that can change the future. "Nobody is out", which is also the name of the voluntary organization to which the profits of the book are transferred, was born to give voice, help and hope, with the special aim to clear the word "disability", bringing the issue to the attention of politics and civil society and conveying a message of true and real inclusion, so that one day nobody will never be out anymore.

even the smallest gesture makes the difference ...

... thanks from all the staff of the ODV Nobody is Out